John is happy to provide instruction or information about learning with Offwell’s own band of ringers and he can be contacted on 01404 831404 or via email: bjtristram@gmail.com

The East Devon Branch of the Guild of Devonshire Ringers also practice advanced methods in our tower about once a month. 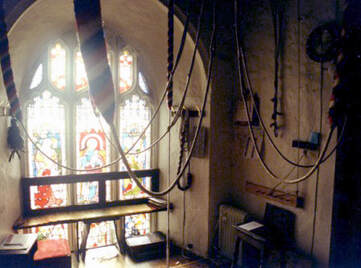 Parishioners will have heard St Mary's bells since the start of Covid, although not as regularly or extensively as usual. The Central Council of Church Bell Ringers have been issuing guidance notes, regularly updated. It would not be appropriate for our ringers to deviate from these, which were developed in close consultation with the Church of England, whose churches house over 90 percent of the bells in this country, hung for full circle ringing. Nevertheless, on the first Sunday service after the initial lockdown, before universal publication of the full guidance, the Offwell band rang 5 of our 6 bells for 15 minutes before service. Subsequently Paul Hutchinson has ensured that 3 bells announce services for 15 minutes on the first Sunday of each month. This allows appropriate social distancing between ringers and necessary measures are taken to ensure adequate ventilation in accord with the guidance.

Meanwhile, as I am now 80, I felt I should be shielding, but I was able to do some work in the tower which I have had in mind for some time. 200 years ago this year the Rev. Henry Ellacombe of Bitton in Somerset, fed up with the drunken behaviour of his ringers, paid the village blacksmith to create a system which would allow one person to sound all the bells. The Ellacombe chimes mechanism was installed in hundreds of churches round the country, mostly in the late 19th century, but few are now in usable condition. There is however a scheme to celebrate the Bicentenary by sounding Ellacombe chimes in as many towers as possible this summer.

John Seymour, the previous Bell Captain, told me that when he first came to Offwell the Rector would sometimes play tunes on the chimes, but when I became Tower Captain I found that several of the pulleys which brought ropes down to the chime frame in the ringing chamber were jammed. The ropes themselves were unserviceable. Some were actually parted, others knotted together, all worn and frayed. After the first lockdown Clive Whithear very kindly helped me bring the mechanism into working condition and on Christmas morning I was able to chime the bells to welcome parishioners to morning service. I found that tension of the control ropes is very critical. The ropes operate a hammer inside the bell as it hangs down; too vigorous a strike swings the bell so much that it’s not in position for the next strike. I need to do some fine tuning before the summer.

As normal ringing practice has not been possible for many months the Devon Guild of Bellringers has been conducting virtual meetings via Zoom every Monday. Sometimes talks are given on relevant subjects; sometimes the meetings are purely social but it is also possible to conduct electronic bellringing using a special app, so members have actually been able to master new ringing methods or keep their hand in with existing skills. All the East Devon ringers, aged from 12 to 87, are looking forward to once more being able to hear 'Look to, treble's going, she's gone' and start ringing the full peals of bells in our towers.

NB. The 200 year anniversary of the Ellacombe invention takes place on 26th June 2021. This bicentenary will be celebrated around the globe and there will be an exhibition in St. Mary’s, about the Ellacombe Chimes, during the month of June.